Gravbrot Ski Club was named after the Gravbrot Rover Crew and built in honor of the famous Eric Johnson Gravbrot.

Alongside the Alpine Highway as it skirts the northern slopes of Mt Hotham, and overlooking the beautiful Diamentina Valley and Razorback Spur, which runs out to Mount Feathertop, stands a stone cairn erected as a memorial.

This handsome memorial is to Eric Johnson Gravbrot, the wording on the tablet reading:

‘The courageous friend of strugglers in these mountains,
when travel was on foot and horse, often in fog and blizzard.
Searcher and helper for any in distress regardless of his own personal sacrifices.’ 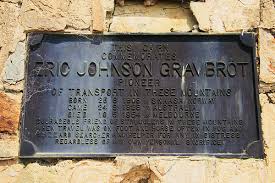 To walkers and skiers and those few hardy people who live in the Hotham–Bogong area, Eric Johnson, as he was know in Australia, was indeed a friend.  He was not a rich man endowed with material possessions, but he was rich in those qualities which go to make a man’s man, and quickly earned the respect of all who made his acquaintance.

Eric Johnson Gravbrot was born in 1908 at Snasa, near Trondheim, Norway, a distant close to the Swedish border, and noted for its extensive forests and numerous lakes, being the home of the elk – the king of the Norwegian forests.

Being the eldest of three boys, Eric was heir to the family property, which had been the Gravbrot home for generations, and at an early age he accompanied his grandfather – a well known marksman – on long hunting and fishing trips in the mountains.

Unbounded energy was something Eric inherited from his family – a family noted for longevity – whilst he developed his self reliance and toughness from the outdoor life he pursued in his younger days.  It is understandable that Eric showed early prowess as a skier, especially as a ski jumper, representing his district in a number of national ski jumping competitions.

Despite his opportunities in Norway, Eric migrated in Australia, arriving in Melbourne in 1928, during the pre depression era, without contacts and with a limited English vocabulary.  His activities were varied in these first few years before moving to the Mount Hotham area – acting as a stable hand, then managing a strawberry farm at Mt Evelyn, running a ski hire service at Mount Donna Buang and working as a member of the famous Jimmy Sharman’s boxing troupe.

The site of the memorial has been well chosen, for it was in that great mountain area where most of his packing and sled service activities were centered.  During the late thirties, in conjunction with the Victorian Railways Department, who owned the Hotham Heights Chalet, and featured weekly skiing holidays at Hotham.  Eric Johnson ran his sled service from the snowline on the Bon Accord Spur to the Chalet.  It was a weekly service each Saturday, carrying packs for the outward party and bringing in gear and supplies for the incoming skiers.  Eric fitted his horses with a modified snow shoe on each foot and seldom missed a connection in fair weather or foul.

It was inevitable that skiers and others must at some time be caught out by the shocking weather conditions which can occur in Victoria’s mountain regions, and it was during these difficult occasions that Eric’s toughness and resources were tested fully, but he never shirked the issue, driving himself to the utmost in the service of his fellow man.

Eric’s agility and speed on skis can be gauged by one occasion when he arrived at Cope Hut to greet Bill Waters and some friends, just as they were finishing an early breakfast, with the quiet remark that he had come from Mount Hotham that morning.  He had covered a distance of some eighteen miles in approximately three hours on an ordinary pair of hickory skis over country which is far from level.

So it is understandable that this kindly and adept Norwegian with the big heart should be remembered by those Australians whom he helped in good and bad times.